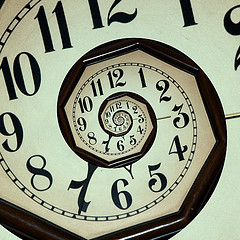 Have you read “In Praise of Idleness” by Bertrand Russell? It is brilliant! Idle hands do not make the devil’s work easy; it’s those busy hands forever mussing things around that are working at the root of all mischief.

Dr. Russell prescribes a four hour work day. Why if you can’t get it done in four hours then you sleep (8 hours) or relax (8 hours) and then you try again for another four hours. It seems like it might work…

Four hours is one sixth of a day. Equally divided, there would be four hours of work or engagement for every twelve hour period. For example, a typical day could be rising at five in the morning and working from six until ten o’clock. Then, your knocking off for a full eight hours. Just imagine! You could be shopping or eating or looking at clouds with a friend. Six in the evening you’re back at work for a good four hours of high productivity.

Seeing that you may not get to sleep until eleven, you may nudge rising time to five thirty A.M. or find a place to nap during your eight hour break.

Let’s do as the doctor orders and work less. Less work means more time for play. When was the last time you spent a whole four hours doing what you love to do? Making birdhouses, playing cards, talking to animals or having sex.