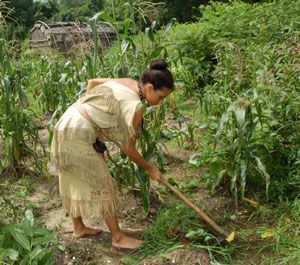 A land of no palaces

How cruelly we are pushed and prodded to labor and fight and die all in the name of some overlord with an agenda! I think now to imagine a world in which such monsters did not exist. No Roman Empire swaggering around and ruling through brute force or the fear of brute force. No Napoleons or Catherines or Mexican drug lords leaning with their elbows into the physical limits of their respective peoples. And also, no rush to build the robots that of course will wrestle from us our very souls.

No, the world that woulda coulda shoulda been…

…small villages where people grow most of their own food and produce whatever wares they need from the natural resources around them. The small villages would be situated within a days travel (by horseback) of a trading and cultural hub.  Here, new ideas could be shared and the whole array of imported goods could be appraised.

Most of the buildings are made from either indigenous woods or from a mixture of mud, straw and water. People wouldn’t drive automobiles because well, after all silly, they’re dangerous! The preferred method of travel is walking with horseback riding a close second.

Schooling would be non-compulsory and quite informal from age six to ten after which some children would be apprenticed to a trade and others chosen to fine-tune certain literary, musical or artistic traits. I see a pristine village square and impromptu gatherings where a learned man or woman would speak about whatever given topic.

Free from political intrigue and the manipulations of priests and merchants, the world would be an Eden! The hub centers of each cluster of villages would link to a National Capital that would ensure the security of the utopia.  In other words, the price you pay for your unbending resistance to the idea of a “one world government” is vigilance. Since the rest of the world is free to create whatever national identity they want, whether horizontal or vertical, it follows that it may be wise to watch your borders — especially since Vertical peoples tend to move around a lot!

This is why the Horizontologist living in his Horizontal Utopia is propped up on his elbow at the moment, checking the hills for invaders.  He knows that Verticality surrounds him. He knows they will not stop.  He lies down and looks up.