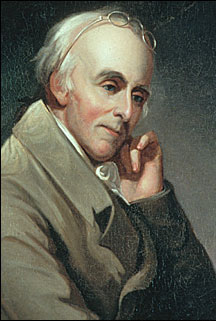 Dr. Benjamin Church, a colleague and friend of Thomas Jefferson, was one of the most respected physicians of his time. He was also a Horizontologist!

In preparation for the Corps of Discovery’s proposed 8000 mile round trip expedition to explore the newly acquired territories of the Louisiana Purchase, Jefferson sent Meriwether Lewis to Philadelphia. There, Lewis received training and advice from the good doctor before assuming his role as captain (with Clark) of the Corps.

Lewis was schooled in the practice of bloodletting, purging, taking warm drinks to sweat, and the importance of wearing flannel especially in wet conditions.

One particular piece of the doctor’s advice aligns (literally) with Horizontology:

“When you feel the least indisposition, do not attempt to overcome it by labour or marching. Rest in the horizontal position.”

In other words, do not try to push yourself beyond a light fatigue which, of course, is quite anathema to what great men of discovery do which is to advance beyond what is conceived as humanly possible.

So, what does a Horizontologist do? The answer, to me, is if you take on a task that requires Herculean effort and fortitude, take your much deserved rest not against the trunk of a tree or slumped up on the back of a horse but stretched flat across a patch of good Earth. The grass will invite you.